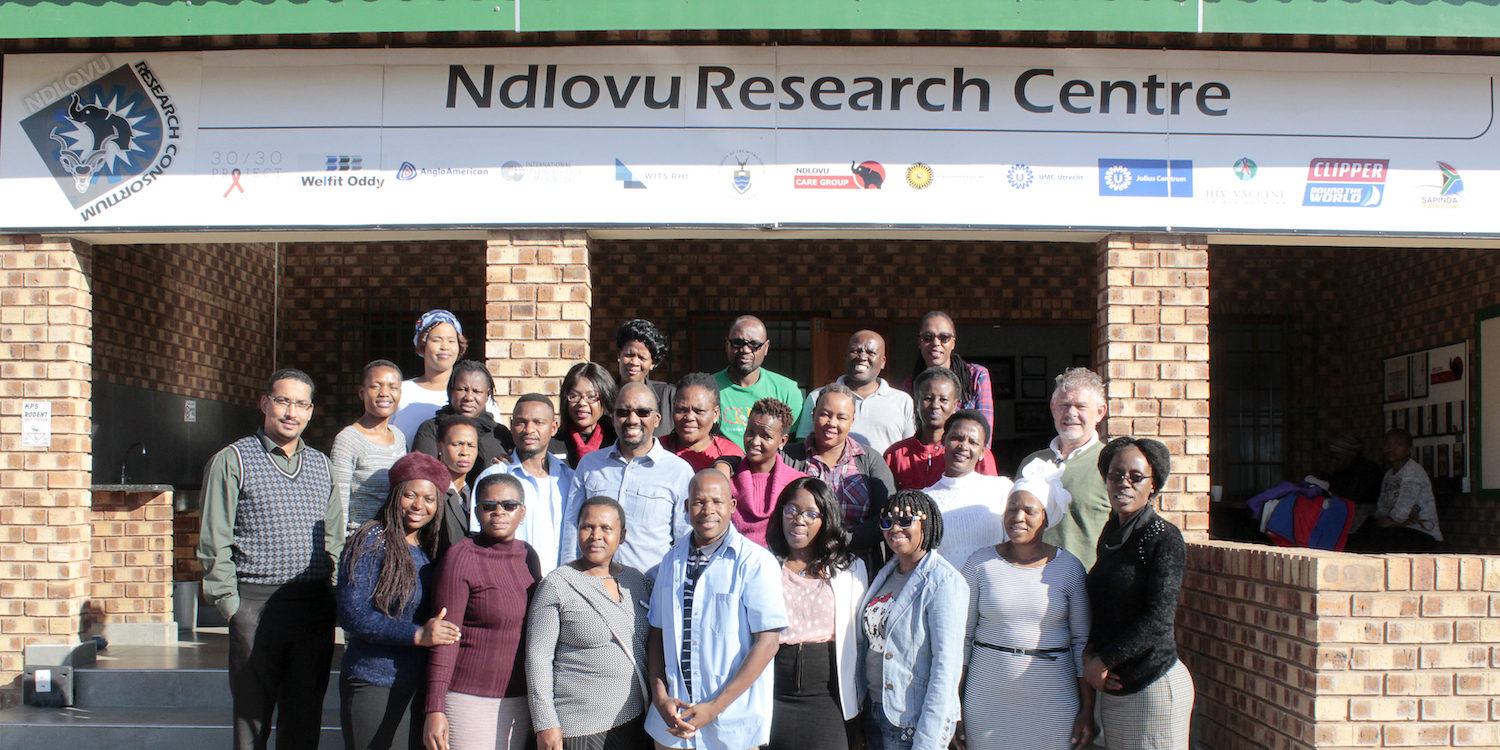 The research team of the Ndlovu Research Department is under the leadership and guidance of Prof Annemarie Wensing, MD, PhD, Clinical Virologist, and her working group in the UMCU

Annemarie Wensing, MD, PhD is a leading clinical virologist at the University Medical Center Utrecht, head of the microbiology training program and lecturer at the Medical School. She is a Honorary Professor of the  University of the Witwatersrand in Johannesburg in South Africa. She consults on clinical management of HIV drug resistance for multiple HIV centers. She is advisor for the WHO HIV resistance network and chair of the international Panel that assesses HIV-1 Drug Resistance mutations (IAS-USA). She is principal investigator of various international studies and collaborations and steering committee member of the Ndlovu Research Consortium. She is a governing board member of the European AIDS Clinical Society (EACS) and Chair European HIV drug resistance surveillance program SPREAD. She is a member of the organising committee of the international HIV Drug Resistance Workshop and an active member of serval guideline committees. Annemarie is (co-) principal investigator of international collaborative HIV cure projects such as the IciStem consortium (www.IciStem.org) and the post-mortem FIND study at WITS university. Together with Monique Nijhuis she steers the Translational Virology Research Group at the University Medical Center Utrecht. Annemarie  published over 150 original papers in peer reviewed journals.

Dr. Wensing will assist in setting up the clinical interpretation and the clinical response system and participate as expert in the clinical video calls. She will oversee the drug resistance surveillance strategy, applied scientific projects and have an active role in dissemination and education.

Monique Nijhuis studied Biology and obtained her PhD in 1999 at the University of Utrecht on the investigation of the impact of antiretroviral therapy (ART) on HIV fitness. Following postdoctoral research training she initiated, together with Dr Annemarie Wensing a research line at the interface between fundamental and clinical research and became an honourable Professor of the University of the Witwatersrand in Johannesburg and an associate Professor of Virology at the University Medical Center Utrecht in The Netherlands. The two research themes are Resistance and Reservoirs and they investigate strategies to improve the efficacy of ART and to clear HIV infection. Monique Nijhuis was granted by the Netherlands Organization for Scientific Research (NWO) with the VIDI and ASPASIA award. She is part of the scientific advisory board of the Dutch Aids Fonds. She is a member of the IAS HIV Cure International Scientific Working Group. She is associated editor of Retrovirology and published over 100 book chapters and original papers in peer reviewed journals.

Monique Nijhuis is involved with several research projects in the Ndlovu Research Departmentsince 2011 and is dedicated to perform the scientific training of local employees and liaison between local laboratories.

Rob Schuurman, PhD, is an associate Professor of Virology at the University Medical Center Utrecht and registered Medical Molecular Microbiologist. Rob is a lecturer in the field of Molecular Medical Microbiology. He  is a coordinator / collaborator in several international research projects in Europe, USA and Africa, mainly focussing on HIV Drug Resistance and /or the development and application of molecular diagnostics. He is a member of the WHO HIVResNet laboratory working group. Rob has extensive experience in the rolling out of laboratory activities in LMIC and is actively involved in various global projects on quality control of molecular diagnostics.

Dr. Schuurman will oversee the capacity building of the Ndlovu laboratory and the quality control programs.

Josien Straver finished Office management at the Rotterdam Academy in The Netherlands in 2017. After working as an Office manager for a year, she has found her place at the University Medical Center Utrecht. In 2017 Josien started working as a Project secretary and now she has grown into a Project assistant at the hospital in Utrecht. She works on the different international projects supervised by Dr. Annemarie Wensing and Monique Nijhuis.

Hugo Tempelman graduated as a Medical Doctor in 1990 at the University of Nijmegen in the Netherlands and left to further his career to South Africa. He has been working in the field of rural South African health care provision for the last 25 years, initially in a government hospital as a Chief Medical Officer and as Head of Paramedical Services for four years at the KwaNdebele Department of Health, South Africa.

Over the past ten years, he has increasingly devoted himself to research into the subjects of HIV-infection and rural healthcare. He held a position as visiting professor in Education and Health Care in Resource Poor Settings at the Utrecht University (The Netherlands, period 2007-2012), obtained a Master’s Degree in Change Management (2007 SIOO, UU) and has initiated the Ndlovu Research Consortium, a scientific collaboration between Utrecht University, University Medical Center Utrecht, and the University of Witwatersrand Reproductive Health Institute (Johannesburg, South Africa). Since 2018 he is a Joint Researcher in the School of Clinical Medicine, WITS Reproductive Health and HIV Institute. At this stage he is involved in several international collaborative randomized clinical trials and academic studys in the field of HIV prevention and treatment.

Hugo, and his wife Liesje, were both Knighted in the Order House of the Orange in 2007 for their outstanding work in Africa.

Ayman Osman is a qualified Medical Scientist in the field of Medical Microbiology and Immunology, and experienced researcher who has been in the field since 2007. His qualifications include BSc (Medical Microbiology), BSc (Hons) Medical Microbiology and MSc (Medical Microbiology). He is at the final stage of obtaining his PhD in Medical Immunology at University of Pretoria. He has participated in large-scale efficacy and safety studies with international sponsors. He currently leads the centre as a Research Development Manager and ensures that staff conducts research of high quality and adherence to all regulatory requirements. He strives to contribute to the surrounding community with focus on ethical standards and safety and well-being of research participants.

Robert Moraba studied Medicine at the MEDUNSA (Medical University of Southern Africa) from 1996 until 2001 to obtain his MBChB degree. This was after obtaining his Bachelor of Science degree (Physiology and Biological Science) in 1995 at the University of the North, South Africa.

In 2003 he started working in a Regional Hospital in the former Kwa-Ndebele (now Limpopo Province, South Africa) as a Community Service Medical Doctor. He left the Public Sector in 2004 to join Ndlovu Care Group as a General Practitioner at Ndlovu Medical Centre and has a wide experience in Hugo Tempelman graduated as a Medical Doctor in 1990 Human Immunodeficiency Virus  (HIV) and Tuberculosis(TB) clinical management.

Robert went for a short period in 2007 to the Julius Center and UMCU- University Medical Center Utrecht, the Netherlands, to be trained in Introduction to Epidemiology, Research and Biostatistics. He made a switch to Research in 2014 where he is currently the leading HIV prevention Clinical Trial Investigator at the Ndlovu Research Centre.

In 2005 he joined Mankweng Hospital under the Department of Health, Limpopo Province, South Africa, to practice as a pharmacist intern and continued to practice as a community service pharmacist at Jane Furse Hospital in 2006 were he was later given a responsibility to be a senior pharmacist. Ambros took a giant step to join Ndlovu Care Group in 2014 with a key interest in HIV prevention trials and he is currently a Responsible Pharmacist at Ndlovu Care Group. He is further interested in the economics of health and firmly believe that access to healthcare should be equitable. Ambros has received several prizes for his accuracy and secure administration from diverse Trial Sponsors.  He is in charge of the  Research Pharmacy of Ndlovu Care Group.

Lucas Hermans is a medical doctor with an interest in internal medicine and infectious diseases and is working in South Africa as a researcher and PhD student, supervised by Dr Annemarie Wensing and Monique Nijhuis at the University Medical Center Utrecht (Utrecht, The Netherlands). The main topic of his PhD project is monitoring of antiretroviral treatment in resource-limited settings, and consists of several translational and clinical research projects. Lucas is the on-site coordinator at Ndlovu Care Group for the ITREMA randomized controlled trial, and is also a visiting researcher at the University of the Witwatersrand Reproductive Health and HIV Institute (Wits RHI, Johannesburg, South Africa). He is the first author of several peer-reviewed publications and has presented his work at several international HIV conferences. It is not often that young scientist like Lucas get the opportunity to present their work at world-renowned Conferences as CROI in Boston USA.

Ndivhuwo Mukomafhedzi is a qualified professional nurse experienced in clinical research. Her qualifications include Baccalaureus curationis nursing science (BCURNS), Btech in Occupational Health Nursing, Advanced Certificate in project Management and Masters in Public health. She started working as a community service Professional nurse at Moretele Sub-district in 2010. In 2011 August she started working as a professional nurse under Department of Correctional service in Kutama-Sinthumule Maximum Security Prison.

She furthered her career by joining The Aurum Institute in 2015 as a professional Nurse supporting Department of correctional service. In 2016 October she then joined clinical research in Clinical HIV Research unit Johannesburg (Hellen Joseph Hospital) as a study coordinator where she conducted different trials in TB prevention, TB management and HIV management. She is currently working as a project manager/ Operational manager and she ensures that NRC conduct research with integrity and adhere to all regulatory requirement. She has gained experience in TB/HIV management and TB/HIV prevention trial.

Prof Venter heads Ezintsha, a sub-syndicate of the Wits Reproductive Health and HIV Institute at the University of the Witwatersrand, Johannesburg. He leads multiple antiretroviral treatment optimisation studies, and has an active interest in public sector access to HIV services. He is currently working on new first and second line antiretroviral options, patient linkage to care interventions, and HIV self-testing projects. He has led large PEPFAR-funded HIV programmes in South Africa, including one that focuses on truckers and sex workers. He has been represented on South African and regional HIV guidelines for over a decade, having done almost all his training within South Africa. He is an advisor to the South African government, ACTG, Southern African HIV Clinicians Society, UNAIDS and WHO.  He has been involved in several human rights cases involving HIV within the Southern African region, and has an active interest in medical ethics.

His major research currently focus on combinations of newer drugs to improve the resistance and potency while lowering the cost of first and second line antiretrovirals, improve early diagnosis of HIV, facilitate access to pre-exposure prophylaxis, as well as using patient information to drive improved linkage to care after diagnosis. He supervises multiple local and international Masters and PhD students, and is the convenor of the regional Diploma in HIV Medicine and Diploma in Sexual Health and HIV for the Southern African Colleges of Medicine.

John de Wit (MSc, PhD) is professor of Interdisciplinary Social Science: Public Health at Utrecht University. John is a social psychologist by training who has worked across the social sciences and public health and health promotion for over 30 years. Much of John’s work is related to the global HIV response and key populations. John’s research interests encompass HIV prevention as well as the health wellbeing of people living with HIV. In the context of the Ndlovu Research Consortium he undertakes research regarding the success of antiretroviral treatment of HIV, including treatment adherence and retention in care.